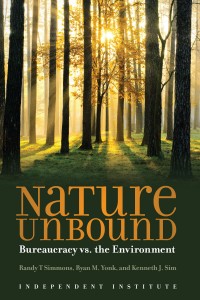 The Independent Institute has just published “Nature Unbound: bureaucracy vs the Environment”, 287 pp.

“In 1934, former U.S. Forest Service ofﬁcial Aldo Leopold, a godfather to the modern environmental movement, wrote that “restrictive laws” had “largely failed” in their mission to conserve America’s forests, rivers, and other natural resources. Less than forty years later, however, as various events pushed environmental concerns into the public spotlight, lawmakers from both parties championed legislation far more sweeping and restrictive than any Leopold had witnessed.

How well did these “restrictive laws” work to right environmental wrongs? Why did so many miss the mark? And how should we go about improving our policies?

In Nature Unbound, authors Randy T Simmons, Ryan M. Yonk, and Kenneth J. Sim offer a devastating critique of federal environmental policy by scrutinizing it through the lenses of biological ecology and political ecology. This powerful framework, they show, reveals that environmental policy has been guided since the late 1960s by demonstrably false assumptions responsible for a host of ineffective or wasteful, command-and-control policies—on air pollution, water pollution, endangered species, wilderness, renewable energy, and more. The mistakes have also empowered political entrepreneurship in ways that have encroached on property rights, burdened the general public, and degraded the civic landscape.

More than a critique of false assumptions and flawed policies, Nature Unbound offers bold principles to help us rethink environmental objectives, align incentives with goals, and afﬁrm the notion that human beings are an integral part of the natural order and merit no less consideration than Earth’s other treasures. Ultimately, nothing less can succeed in our efforts to restore natural resources and revitalize our social and political ecosystem” (back cover ).

Of course this book deals only with the US context but it could inspire a research on the European situation where both member states  and the EU Commission compete to turn out regulations the long term side impacts of which are  not assessed.