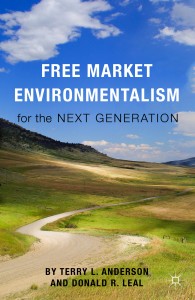 I do think that Reed Watson’s (new executive director at PERC) review is best fitted for the English speaking community:

“When Terry Anderson and Don Leal wrote the first edition of Free Market Environmentalism in 1991, the idea that markets and property rights could improve environmental quality was just that—an idea. The predominant view was that economic freedom and prosperity were the cause of environmental destruction, not the cure, and that regulations were the only way to protect environmental quality. Terry and Don’s book argued exactly the opposite. Based on their own research and the research of scholars like P.J. Hill, Rick Stroup, and Bruce Yandle, Free Market Environmentalism explained how clearly defined, secure, and tradable property rights could create incentives for environmental stewardship that transcend the need for expensive and ineffective regulations. It also described the institutions that allow economic growth to promote environmental quality, namely open markets and the rule of law. As intuitive and logical as these arguments were, they were also threatening to the environmental establishment. One critic went so far as to comment that “free market environmentalism is as an oxymoron, and Anderson and Leal are the morons!” But results have a way of quieting even the loudest critics.

The second edition of Free Market Environmentalism, published in 2001, contained scores of examples of “enviro-capitalists” achieving conservation success where political environmentalism had fallen short. As the free market environmentalism paradigm gained traction, PERC’s reputation began to shift from one of a radical voice in the wilderness to a voice of reason in the environmental debate.

In February 2015, Terry and Don will complete the trilogy with the publication of Free Market Environmentalism for the Next Generation. Building on the theoretical foundation of the first edition and the proofs of concept in the second, the new book presents free market environmentalism not as a contrarian idea but as the best strategy for conservation in the 21st century. There’s ample evidence to support the claim, like the success of catch shares at recovering marine fisheries, water markets at restoring stream flows for fish, and visitor fees at improving the management of national parks. PERC’s scholarship played an important role in advancing these and other policy reforms, and we will continue to invest in policy-relevant research that reveals the efficacy of and best strategies for harnessing environmental markets.

As free market environmentalism becomes more mainstream, PERC must continue to evolve. While staying true to our research core and maintaining our voice of reason in the environmental debate, we must become a source of solutions to environmental problems. Our outreach and applied programs will be crucial in this evolution, allowing us to refine our ideas, expand their relevance, and share them with the next generation of students, scholars, entrepreneurs, and policymakers.”

This 3rd edition is clear and loud in advocating new environmental policies as a sustitute and/or complement ti “Command and Contrl”. It could inspire a new path for Eurpean governement which stil enact law, directives and regulation which appear too often moderately efficient if not counter productive but always costly if not liberticide.